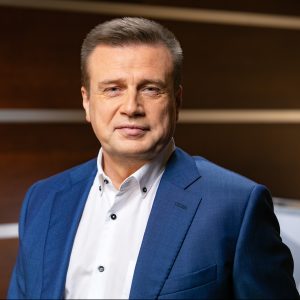 Andriy advises clients on the matters of corporate law, mergers and acquisitions, taxation and other general business issues.  Being a business law advisor, he also has vast litigation experience.  This helps his clients assess their risks better. Andriy has practical business insight into various industries, including mining & metals, agriculture, banking & finance, which he obtained while serving as a member of supervisory boards of Metinvest (2007-2013), MCB Agricole Holding (2009-2012), Agrokombank (2000-2003), and Agricultural enterprise “Kalyta” (2006-2012).  Besides, Andriy Vyshnevsky chaired the Supervisory Council of BM Bank-Ukraine in 2013.  He had also worked as the Deputy Chairman of the Department of Foreign Economy and Consulting with the Ukrainian Chamber of Commerce and Industry of Ukraine (1988-1991) and served as the advisor to the Minister of Privatization of Ukraine (1991-1992).

Andriy has assisted clients in creating joint ventures and partnerships in various jurisdictions and numerous industries, including mining & metals, energy, and agriculture. He has advised clients on complex issues related to joint ventures, including choice of law, entity, structure, and issues relating to majority/minority ownership, 50/50 ownership, and other governance matters.

Andriy has been recognized for his business expertise by the following legal directories: Chambers Global, Chambers Europe, PLC Which Lawyer?, The Legal 500, Best Lawyers International, YurGazeta, and YurPractica. The Legal 500 – EMEA recommends him as a leading individual in corporate and M&A law and in banking, finance and capital markets law, while Chambers Global and Chambers Europe recognize him as a leading lawyer in dispute resolution (Band 3).